A product with a Protected Designation of Origin (PDO) is closely linked to the geographical area in which it is produced: the island of Menorca. Geoclimatic factors (soil characteristics, temperature, humidity, light, etc.), together with the human element (traditional production process and maturing practices), determine the final characteristics, aroma, and flavor of Mahón-Menorca PDO cheese.

To refer to Mahon-Menorca cheese, is to deal with a part of the culture and customs of the island of Menorca and has been and is a key element in maintaining its current appearance.

The livestock farming carried out on the single-family properties, the land divided into plots by a multitude of dry stone walls so that the cattle can graze freely, make up the characteristic landscape of the Menorcan countryside and have made it possible to maintain the ecological balance, which has made it possible for UNESCO to declare Menorca a Biosphere Reserve.

Its color is white-yellowish, with a bark little developed, soft, and elastic. It has a lactic aroma with a slight hint of butter and a light acidic touch, characteristic of the Mahón-Menorca.

The bark is orange or brown if it is handmade. It is firm and easy to cut, yellowish ivory colored, with a variable number of small eyes, distributed in an irregular way. It has a milky taste and aroma.

Its texture is firmer and harder, less elastic, and in advanced stages of healing, brittle and flaky when cut. Highly evolved, complex and intense flavor and aromas, with a long-lasting mouthfeel.

Mahon-Menorca Cheeses D.O.P., are pressed paste cheeses, paralepipedic shape, with rounded edges and corners, have the Natural Flavour of our Island, declared a Biosphere Reserve by UNESCO. To make them we use milk from Minorcan cows and a method of millenary tradition (included in the Regulations of the PDO). Afterwards, the wind, humidity and light of Minorca are responsible for giving our cheeses their particular, intense and unmistakable flavour, which has become the attribute most highly valued by consumers. The taste of Menorca.

Within the framework of the Protected Designation of Origin, there are two types:

Mahón-Menorca cheese: Made with milk that has undergone some kind of conservation treatment, such as pasteurization. Moulds can be used to shape it.

Artisan Mahon-Menorca cheese: made with raw milk from the farm itself and using the “fogasser” (cotton cloth) to shape it.

Both have in common the same basic processes, but with these differences that affect the characteristics of the final product. 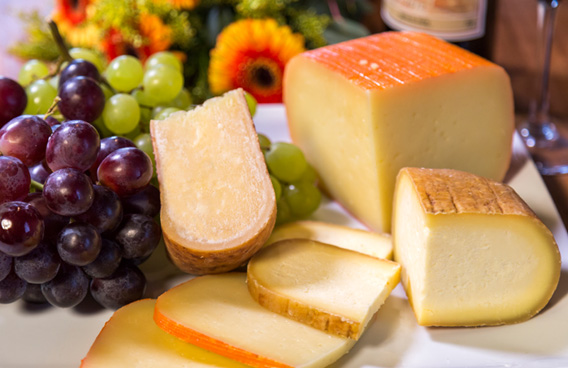 Mahón-Menorca Artisan Cheese, which is made from raw milk from the farm itself, is moulded by bagging the curd on a cotton cloth, called a “fogasser”, and suspending it at its four corners. Placed on a table, the whey is removed and the mass is given cohesion by manual pressing and binding with a string called a “lligam”.

The piece is then placed in a press and, when it is removed from the press, a design called ‘mamella’ is engraved in relief on the upper face of the cheese, caused by the folds of the canvas and the binding. It is put in brine and then transferred to ventilated premises where it is aired and the development of surface flora begins. It can then be taken to the maturing cellars where the traditional treatment of the rind is carried out, consisting of a series of turns and periodic smearing with olive oil or a mixture of oil and paprika, which gives it its characteristic orange colour.

In the case of Mahon-Menorca cheese, the process is the same, the milk can be pasteurised and special moulds can be used which give this cheese its characteristic square shape, with sharp and rounded edges. 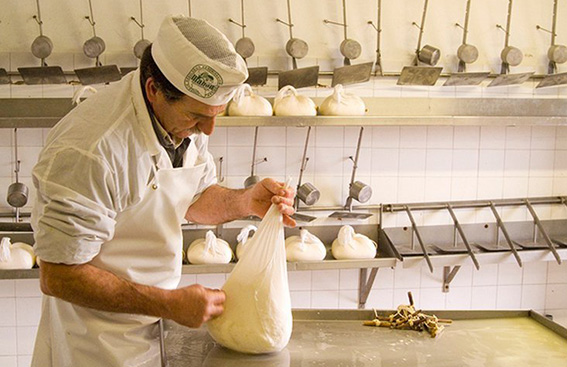 The conservation of the cheeses outside the ripening cellars, either in storehouses, restaurants or in our own kitchen pantry, must be taken care of due to the difficulty of maintaining a correct temperature and humidity for its conservation so that it does not lose its organoleptic characteristics.

The cheeses can be kept in the least cold part of the refrigerator, wrapped in shrink film or with a damp cloth to prevent them from drying out too much.

The optimal temperature for consumption should be 18 to 20ºC, so it is recommended to take it out of the refrigerator in advance for optimal tasting. 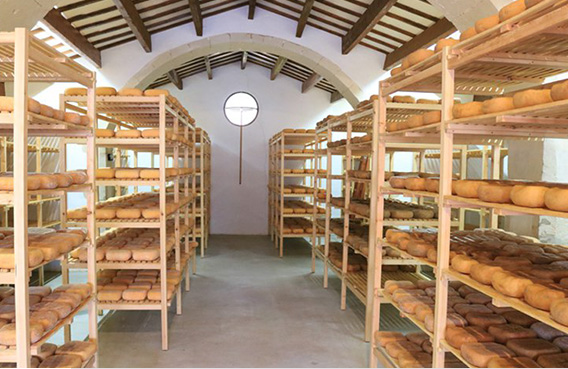 The history of cheese on the island goes back a long way; even to prehistoric times, as suggested by the ceramic remains of utensils used to make it, dating back to 2000 BC. There is written documentation from the 5th century AD referring to the consumption of cheese on the island and Arab documents from the year 1000 which highlight the excellence of Menorcan cheese.

Its foreign trade was already important in the 13th century; but it was during the period of British domination that there were a considerable boost and the origin of its name “Mahon”, the port where the product was shipped. In 1985 it obtained the Designation of Origin and its Regulatory Council was constituted.

Subsequently, in 1997, the protected name was extended to “Mahón-Menorca”.

The production process of Mahon-Menorca cheese (“formatjat”) has remained unchanged for a long time in all the Minorcan farms (“llocs”), where it is made following very old practices. As a whole, it is determined by a series of operations that have been passed down from father to son, and its correct application defines and gives rise to the authentic Mahon-Menorca cheese, although recently some modifications have been incorporated that are recommended by current technological advances. Mahon-Menorca cheese is matured in the ripening cellars, where the process receives the traditional rind treatment, consisting of a series of turns and oil and/or paprika smearing. 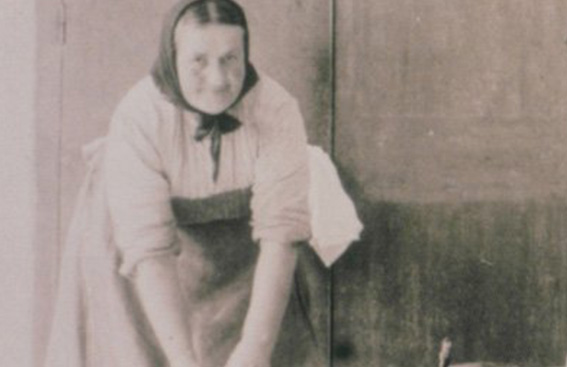